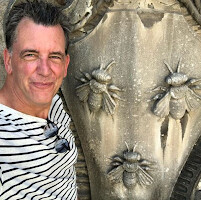 Cybele: The (Bee) Goddess Who Fell to Earth

Ancient Rome was a pagan nation that venerated many arcane goddesses and gods. Incredibly, one of the most noteworthy was a stone from heaven, revered as the mother goddess, which quite literally became the queen bee of all deities, a bee goddess known as Cybele aka the Magna Mater or “Great Mother.”

Andrew recounts his travels through ancient Anatolia and Rome, and retraces the origins of what is arguably the most adorned goddess in history. Controversially, Andrew will present evidence that the meteorite famously worshipped as Cybele is one and the same as both the Holy Grail and the black stone of Mecca, the most exalted object on earth.

Andrew Gough is a researcher, writer, and contributor to history and mystery television shows, such as Forbidden History, NASA’s Unexplained Mysteries, What on Earth, Mysteries of the Abandoned, and numerous others. He has published more than 40 articles on his website and is the Editor-in-Chief of The Heretic Magazine. Andrew studied with a German Cabalist in Catalonia, Spain, who mentored Jean Cocteau and Salvador Dalí. There, he learned of the esoteric history of the sacred bee and began his spiritual journey of discovery regarding its many sacred traditions. He has travelled extensively in his support of bee research and has written expansively on the subject. Andrew hails from Chicago and has lived and worked in London for the last 20 years.

CREATING CULTURE FOR AN INSPIRED FUTURE

Inspired by the scholarship and leadership of

the Melissae (ancient bee priestesses and oracles), we invite you to

insights, visions, and dreams for a new tomorrow.

During this yearlong online series, we meander through a labyrinth

— the pillars that comprise the College of the Melissae.

Amid troubled times, together we ask: Who are we?

Where did we come from? And how can we recreate our cosmology?